A potential COVID-19 vaccine without a shot? One research team is working on a patch 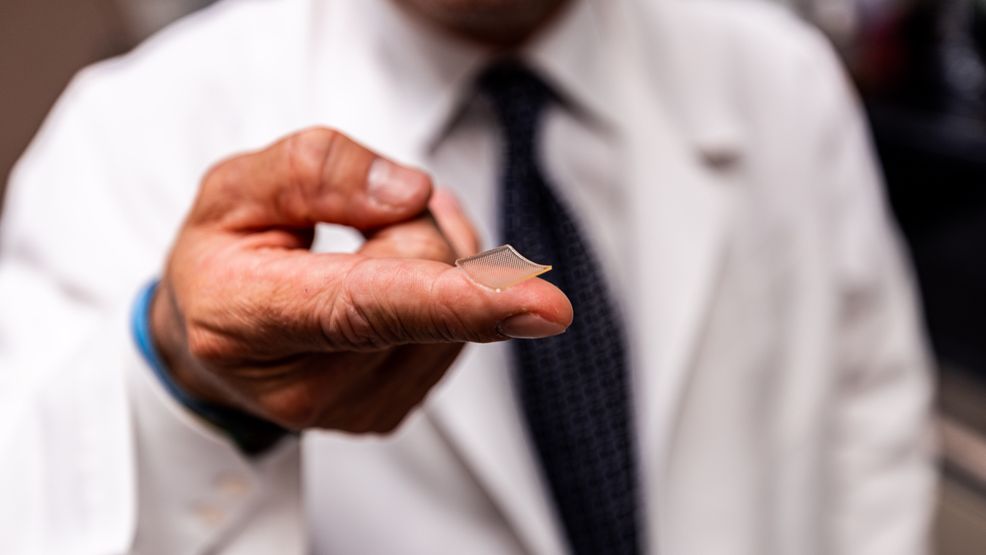 PITTSBURGH, Pa. (SBG) — Researchers around the world are frantically working on a vaccine to combat COVID-19. But what if you could one day get that protection without a shot? One research team in Pittsburgh is working on a small skin patch it says has the potential to stick it to the coronavirus in an innovative way.

It’s a tiny flexible patch, as small as your fingertip. It may look like a high tech Band-Aid, but the team designing a new, innovative vaccine and delivery system, says it isn't designed to stop bleeding. Instead, what they're developing at the University of Pittsburgh School of Medicine and UPMC is a novel approach to battling coronavirus.

Dr. Louis Falo, Professor and Chairman of the Department of Dermatology at University of Pittsburgh School of Medicine, explains how the patch works, "It’s composed of about 400 small needles about the width of a human hair."

Falo says their team's vaccine, if eventually approved by the Food and Drug Administration, would deliver the COVID-19 protection we need through the skin. It follows in the footsteps of another clinical trial linked to Pitt that uses what's called a microneedle array to deliver chemotherapy to skin cancer. But despite relying on hundreds of tiny needles, this kind of patch avoids the pain of the shots we all hate. Dr. Falo said, "They don't cause any bleeding. The needles are very short so they're just long enough to penetrate the outer layers of the skin so that we get good delivery but not long enough to hit any pain receptors or blood vessels."

"They’re like small Washington monuments," said Dr. Falo while showcasing enlarged images of the microneedles. "The antigen is in the tip of the needles."

The lack of pain is just one simple side benefit, according to the team at Pitt. Their vaccine and delivery system also uses inexpensive material, doesn’t have to be kept cold for shipping or storage and it’s simple enough to potentially be administered without a healthcare worker in the future. But the big deal is how quickly and easily scientists say it can be manufactured and put into the hands of people who need it, if it clears FDA hurdles.

"In this case, the pandemic is all over the world so we potentially need 4 billion doses of vaccine which we are not going to be manufactured in a short period of time," said Dr. Andrea Gambotto, Associate Professor of Surgery at the University of Pittsburgh School of Medicine, who is a key member of the vaccine development team. "Ideally a vaccine needs to be manufactured with scalable technology."

And that’s the difference maker here, researchers say. According to scientists at Pitt, this type of microneedle array would be easy to scale up. Right now, with just one worker they say they’ve got the ability to crank out 100 doses a day. An industrial lab could potentially do thousands of times that work. "We can distribute this worldwide, globally, very quickly," said Dr. Falo.

Dr. William Moss, Executive Director of the International Vaccine Access Center at Johns Hopkins Bloomberg School of Public Health, tells Spotlight on America there's no doubt this type of vaccine technology could be scaled. But it would require a new process that he says could create some delays in distribution. He pointed out that while some smaller companies are currently making this technology on the limited scale needed for clinical trials, no major manufacturers are currently capable of producing this type of microneedle vaccine in large scale. Dr. Moss also questioned how likely investors might be to back an idea like this in light of the fact manufacturers don’t have a true sense of future demand.

Pitt's team told us the molds needed for their microneedle array can be easily and inexpensively produced by 3D printing. The group said development and scaling up of the process was already happening, with the potential for Pitt and UPMC to seek funding through private partnerships or the government to continue production down the road in a larger scale.

But like other institutions in the race to create a vaccine, the scientists in Pittsburgh still need to conduct clinical trials before they make any serious moves on production for the masses. Experts have speculated the entire approval process could take months, even a year or longer. Dr. Falo remains hopeful, saying "We need to bring all those scientists together from different areas, working together, to be successful in this effort and that’s what’s happening here."