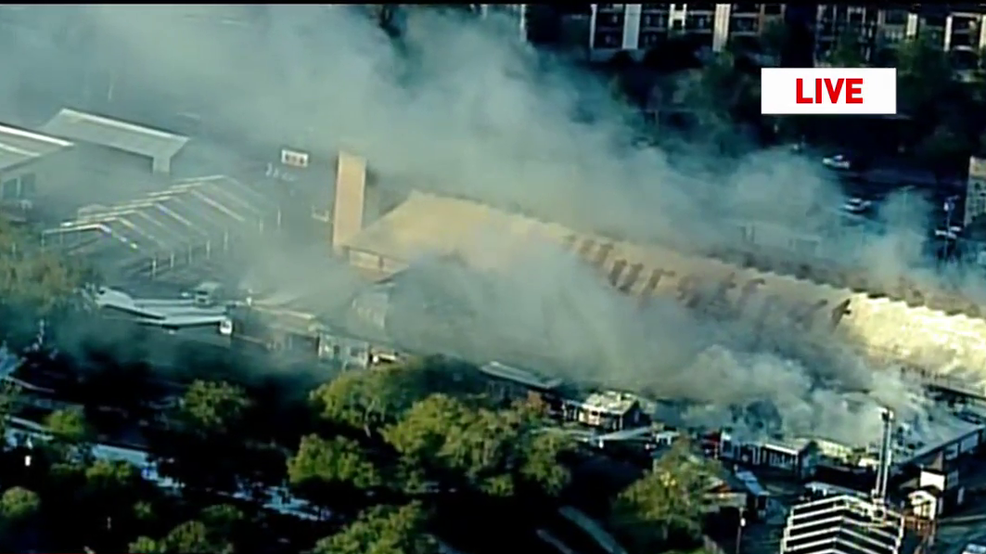 A small fire that was contained to one booth at the popular Wurstfest grounds on Thursday night reignited on Friday morning and caused extensive damage to the Marktplatz building.

The big question right now is will Wurstfest be able to reopen next year after all this damage? That’s still very much up in the air.

Firefighters said the second and larger fire started at about 6 a.m. at the grounds in New Braunfels.

By the time the flames were put out, extensive damage had been done to the Marktplatz building, which houses food and market vendors. The roof partially collapsed onto the venue.

The more iconic Halle Hall, which carries the logo on the side of the building, suffered some smoke damage, but was otherwise still in tact.

A New Braunfels Fire Department spokesperson said no one was injured. The festival itself had just wrapped up its last days about a week ago.

“You have a very very fine firefighting force that is working diligently and is working with a lot of surrounding agencies, there’s a lot of coordination going on to make sure everyone is safe and as much of the structure that can be saved will be," said David Ferguson, spokesperson, New Braunfels Police Department.

Wurstfest organizers are expected to provide updates on the event's Facebook page.

As of 8:30 a.m., Landa Park Drive is closed, as is Henman Island Drive. The Comal River is also closed due to runoff from the fire, including soot and foam that was used by firefighters to fight the flames. The river closure is expected to be temporary.

This is a developing story. Check back for continuing updates.

A fire in a vendor booth at the Wurstfest Marktplatz has caused an estimated $50,000 in damages.

According to New Braunfels Fire Battalion Chief Mike Wehman, crews responded to the grounds for what he said was a smokey smell on the grounds.

Wehman said they arrived to a thick haze and an active fire in the vendor booth inside the Marktplatz building.

"Heavy smoke filled the entire Marktplatz area, which is a large, probably football field sized area," Wehman said. "Smoke was emitting out of the open door. It was thick smoke and got worse after we got here as the fire started to spread."

The fire itself was taken out quite quickly, according to Wehman, but he said the damage wasn't as limited as they would have liked.

"Because the booths are like free-standing buildings within the building, the flames did damage the roof structure of the Marktplatz part of the building, that will have to get looked at by an engineer at a later date to determine what kind of repairs they'll need to make," Wehman said.

There were a few Wurstfest staff members inside the building, but Wehman said no one was injured.

Wehman said he isn't speculating whether or not someone could have left something on from Wurstfest this past weekend to cause the fire.

"I wouldn't speculate, but it doesn't appear that something was left on," Wehman said. "The investigators are in there right now."

The investigation is ongoing.