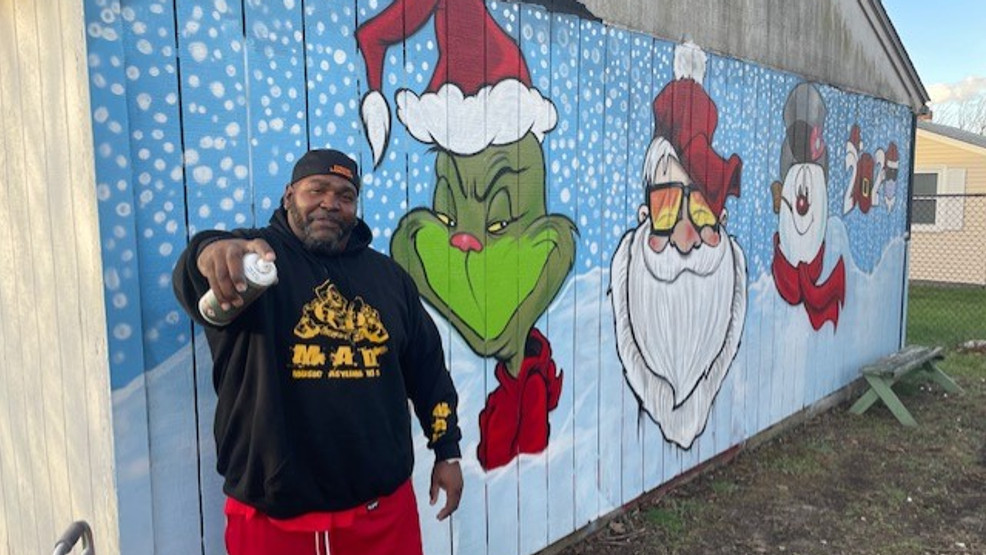 PROVIDENCE, R.I. (WJAR) —An artist in Rhode Island is hoping to make kids in his neighborhood smile with his holiday murals.

In the sixth grade, Paul Morse said he learned graffiti.

"I've been doing art since the sixth grade. First wall I ever painted was the elementary school over there and I got in big trouble," said Morse. "I never got in big trouble for it. My parents had to pay a few fines."

Throughout his entire life, Morse said art always stuck with him.

He's painted many murals and does work strictly for commission now. He works well with spray paint.

"It's fun man, I enjoy it, it's kind of self-expression, it's therapeutic," he said. "I go to the gym, but it doesn't touch the creative side."

Morse said he's close with one of his elderly neighbors.

"She knows I've been doing murals forever and one day, I was out here cooking on the grill I was looking at and said, 'You know? What I should ask Judy if I can paint on her garage'," said Morse. "She told me yes, I promised her if I didn't have a mural up, I would paint it its normal color."

Since that conversation, there hasn't been a blank garage canvas.

"I'm always using it, I'm always painting it, the first was at Halloween when I realized people enjoyed it," said Morse. "There's two schools right down the street from me and because of COVID, they go for walks and they come down here stop there and take pictures and I'm always changing it, so I'm like, I'll do it for all the holidays."After the Halloween mural proved to be a success, he painted a Christmas one.

On it, is the Grinch, Santa, Frosty the Snowman and a 2020 graphic with a mask.

"People love it when I'm painting. They'll beep, they'll say, 'Oh, can we take a picture in front of it, it's great'," said Morse. "The kids, they get inspired by it, the art teacher at Gordon School said the kids want to learn how to spray paint and do graffiti. I'm willing to give classes for free."

"Art is a great way for self-expression and creativity, it gives kids something to do," he said.

Morse's dad, Norman Morse, lives next door to him.

NBC 10 asked him about his son getting in trouble for art when he was younger.

"I thought it wasn't going to go anywhere when it started and to see how it's taken off it's unbelievable," he said. "I'm very proud of him, I'm really proud of him, I hope he takes it to the top of ceiling."

Morse encourages people to stop by and take a selfie with the mural located at 164 Vincent Avenue in East Providence.

He just completed knee replacement" surgery but hopes to be well enough to paint one for the New Year.