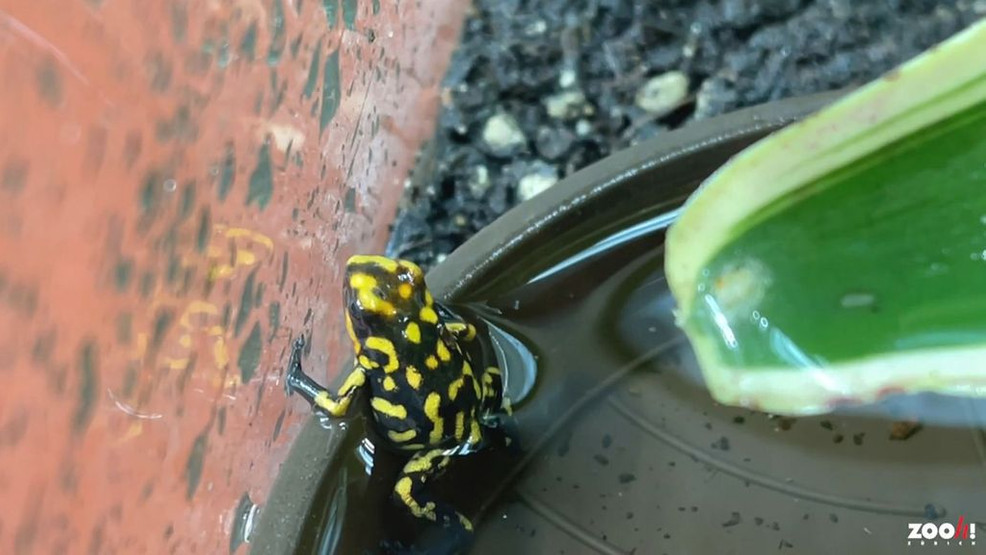 The Zurich Zoo has welcomed its first naturally reproduced harlequin poison dart frog. The brightly colored amphibians got their name from Native Americans, who used their toxic secretions to poison the tips of blow darts.

Due to habitat destruction and the illegal animal trade, the IUCN Red List of Threatened Species lists the harlequin poison frog as critically endangered.

The frogs survive only in a small part of a Colombian forest, where they lay just a few eggs and guard them from predators.

They are endangered because their bright colors — which are supposed to deter predators by reminding them they are deadly creatures if eaten — makes them easy targets for animal smugglers to trap for selling on the black market.

The Swiss zoo project is seen as vital in order to ensure the species survives. The zoo states that there was a lot of trial and error until they determined how to hatch the tadpoles, which feed on their mother’s unfertilized eggs until fully developed.

According to the zoo, the species is difficult to breed because egg laying takes place on a bromeliad leaf, where the male guards and moisturizes the eggs until they hatch two weeks later.

In contrast to regular frogs, which usually lay a lot of eggs and suffer a great offspring loss because of predators, the harlequin poison frogs lay only a few eggs and take care of them until they are fully developed.

After the eggs hatch and tadpoles emerge, the parents transport them into small nutrient-poor waterholes, mostly inside bromeliad funnels, where they are safe from predators but suffer from lack of food.

Zurich Zoo has had harlequin poison frogs since 2000 and received three more in 2013, after they were seized by customs. Another male individual was brought from a private home shortly after.

The newly developed harlequin poison frog ended a long period of unsuccessful breeding efforts in which the frogs struggled to carry their tadpoles into the watering holes.

A recent collaboration with the Cali Zoo in Colombia ended in the establishment of several terrariums and has resulted in a breeding-friendly environment for the small amphibian.

“Since 2006, the Zurich Zoo has been committed to the Amphibian Survival project to protect the amphibian population in Colombia,” the zoo said.

The small amphibian was described as a distinct species in 2018.