Calls for Rochester Police officers to be fired, charged in man's death in March 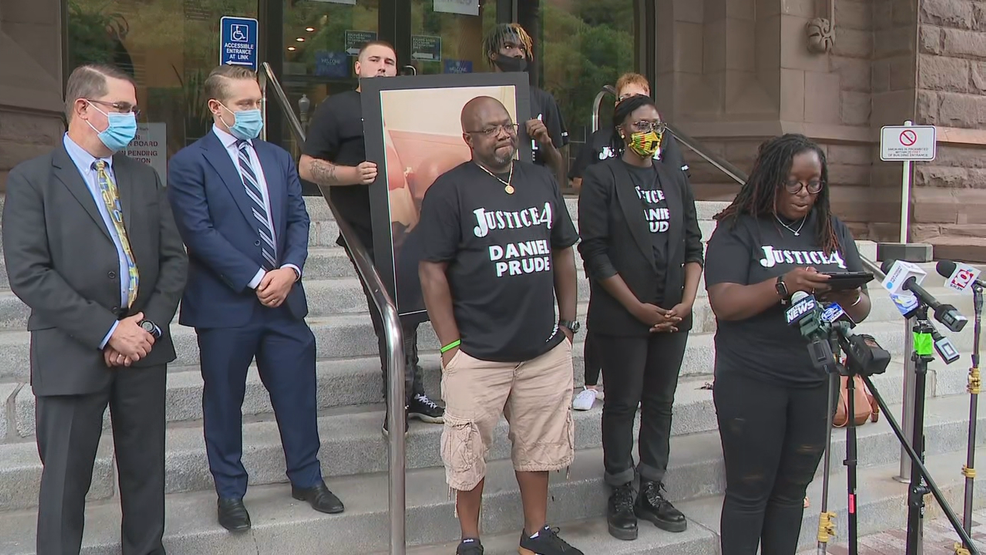 Rochester, N.Y. – Community advocates are calling for charges to be filed against several Rochester Police officers they say caused the death of a man suffering from a mental health crisis last March.

During a news conference Wednesday morning, Free the People ROC called attention to the death of Daniel Prude. Organizers say Prude was in the midst of a mental health crisis when Rochester Police responded to the 400 block of Jefferson Avenue on March 23.

They say Prude was unarmed and unclothed, and he complied with officers’ orders. They say officers mocked Prude and placed a bag over his head.

Prude’s death was caused, they say, after one officer put his knee on Prude’s back, another held his legs and a third pushed Prude’s head into the ground with his full weight.

“They treated my brother like a piece of garbage,” said Prude. “What do you do to garbage? You throw it out. So, that’s basically what they’ve done to my brother.”

An autopsy report from the Monroe County Medical Examiner’s Office ruled Prude’s death a homicide. Under the cause of death was listed “complications of asphyxia in the setting of physical restraint”, excited delirium and acute phencyclidine (PCP) intoxication.

Joe Prude says his brother was from Chicago and had come to Rochester to visit family. He said he called first responders to get help his brother in the midst of his mental health crisis. In retrospect, Prude says he wishes he’d never made that call.

“All I was trying to do was get him some help,” said Prude. “And the help I thought I was getting – you think I’m going to trust one any of them now? No, I’m not.”

Additionally, they are calling for City Council to pass legislation that forbids police officers from responding to mental health crises.

“It is abhorrent that Rochester has no capacity to respond to mental health crises in any other way than state-sanctioned violence and coercion,” said Stanley Martin of Free the People ROC. “There is no place for police who are fundamentally violent workers in responding to mental health emergencies.”

“We must create an alternative to police for emergency responses staffed by mental health professionals trained in the use of clinical treatments as alternatives to the police,” she added.

Attorneys for the Prude family say they have filed a notice of claim with the City of Rochester. They say the New York State Attorney General’s Office is also investigating the case.

Wednesday afternoon, Rochester Mayor Lovely Warren and Police Chief La’Ron Singletary offered their condolences to Prude’s family and said it is being investigated by the State Attorney General's Office.

Following the incident on March 23, Singletary said he ordered criminal and internal investigations into the incident. He says Prude died March 30.

On April 16, Singletary said his department was informed that the State Attorney General’s Office would be tasked with investigating the case. A 2015 executive order from Gov. Andrew Cuomo requires in-custody deaths to be investigated by the A.G.’s Office.

“We don’t have a problem with holding anyone accountable, but the investigation has to take its course,” said Singletary.

Leaders pushed back against the claim that there was a cover-up in the case.

“There is no cover-up whatsoever,” said Singletary. “We’re going to take a look at this. The criminal investigation conducted by the Major Crimes Unit, conducted by the Attorney General’s Office is going to look at the actions of the officers in a criminal light. The internal investigation looks at whether the officers violated policy and procedure of the Rochester Police Department.”

Singletary said neither the internal or criminal investigations have been completed.

As of Wednesday, Singletary said, the officers said to have been involved in the incident have not been suspended.

“The death of Daniel Prude was a tragedy, and I extend my deepest condolences to his family. I share the community’s concerns about ensuring a fair and independent investigation into his death and support their right to protest. Pursuant to Executive Order 147, the Special Investigations and Prosecutions Unit of my office is already actively investigating this incident. As with every investigation, we will follow the facts of this case and ensure a complete and thorough examination of all relevant parties. We will work tirelessly to provide the transparency and accountability that all our communities deserve.”