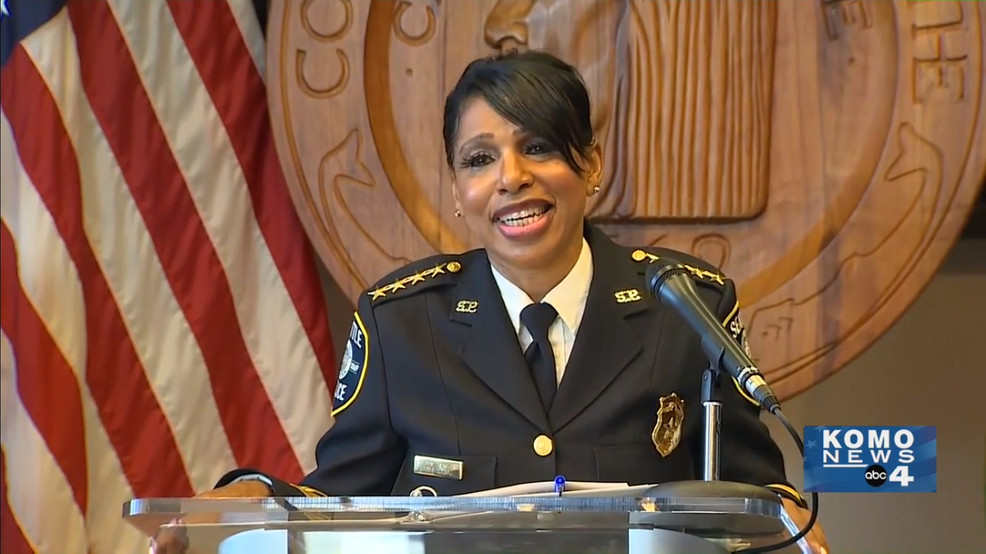 Durkan noted that the council never asked for or received input from the police as council members were considering what and how to cut the current spending plan as part of the panel's effort to reimagine the city budget.

"It's not about the money, it's about the respect," said Durkan, who said the council tellingly did not cut the salaries of any other municipal department heads or its own staff. "It was infuriating and deeply disappointing."

Durkan's remarks came after Best announced her decision to the city during an 11 a.m. news conference in which she thanked the mayor, her staff, the city and its residents.

"This was a decision I wrestled with, but it was time," Best said. "I will always be a police officer. It's who I am. But when it's time to go, it's time to go."

The council ultimately approved a spending plan that didn't much cut Best's salary from where it was last year, but it did reduce the salary of the 12 other non-union sworn officers who are part of Best's command staff. Durkan suggested the vote violated the City Charter because it requires the mayor to uphold contractual obligations.

"The charter requires me to honor contracts and I plan to do so," Durkan said.

Councilman Andrew Lewis said in a statement that he disagreed with the vote to cut the pay of Best and her management team.

“That in part is why I was never for cutting the pay of Chief Best and her executive team," he wrote. "Along with Councilmembers Pedersen and Juarez I voted against the pay cut that passed 6-3 on August 5th. I further conveyed this strongly and forcefully on Monday August 10th by offering an amendment to reverse the cut entirely, but my colleagues chose differently."

News of Best's decision drew a reaction from Washington, D.C., and Attorney General Bill Barr, who blasted talk of defunding the police.

“I was disheartened to learn of the resignation of Seattle Police Chief Carmen Best. Her leadership and demonstrated commitment to her oath of office reflected all that is good about America’s law enforcement. In the face of mob violence, she drew the line in the sand and said, “Enough!”, working tirelessly to save lives, protect her officers, and restore stability to Seattle. Her example should be an inspiration to all who respect the rule of law and cherish safety and security in their communities. This experience should be a lesson to state and local leaders about the real costs of irresponsible proposals to defund the police."

Best said her retirement from the Seattle Police Department will be effective Sept. 2 in an email to staffers in the department.

The police chief's retirement follows the City Council proposing deep cuts to her pay and the compensation for 12 members of her command staff.

"This was a difficult decision for me, but when it's time, it's time," Best wrote in the email. "I want to thank Mayor Durkan for her continuous support through good times and tough times.

"I am confident the department will make it through these difficult times. You truly are the best police department in the country and please trust me when I say the vast majority of people in Seattle support you and appreciate you."

"Know that while I understand the Chief’s reasons, I accepted her decision with a very heavy heart," Durkan said in the email. "I have had the privilege to be with Chief Carmen Best in so many situations: with her family, at roll calls, in community meetings, and in nearly weekly meetings addressing public safety in Seattle. Her grit, grace and integrity have inspired me and made our city better. These last months, I knew Chief Best was the person to lead our city through this challenging time, to reimagine policing and community safety. Her leadership is unmatched nationwide, which is why it is a sad day for our City to lose her.

"Carmen Best is still devoted to this department and our city," Durkan continued. "I regret deeply that she concluded that the best way to serve the city and help the department was a change in leadership, in the hope that would change the dynamics to move forward with the City Council."

Durkan said she will appoint Deputy Chief Adrian Diaz as the interim Chief of Police.

Diaz has served the Seattle Police Department for nearly two decades and led the Collaborative Policing Bureau, the mayor said in the email.

"We are fortunate that Deputy Chief Adrian Diaz was ready to step into the job and he will ensure SPD remains committed to continuing Chief Best’s vision to build a police department that is centered around true community policing," Durkan said.

After several hours of debate Monday and in previous days, Seattle City Council's approved its controversial spending plan which reduced funding to the Seattle Police Department by 14 percent, far below the 50 percent reduction that some members had lobbied for.

Approval of the measure first came with an 7-1 vote on several amendments introduced by the council that included cutting the pay of top police officers and eliminating the Navigation Team and SWAT unit.

"Why on Earth – for the people who’ve worked so very hard – would we ever consider not having the best of the best and compensating them fairly?" Best said in a press conference in response to the cuts. "I find that absolutely shocking and quite frankly – I think it’s punitive and not well thought out. And that’s exactly how I feel about it."

The entire city budget was approved shortly after 5 p.m. Monday by council members who all voted for the legislation with the lone no vote issued by Councilwoman Kshama Sawant. Councilwoman Debora Juarez did not attend the meeting.

The budget reduction could affect as many as 100 officers through layoffs and attrition — an action supported by demonstrators who have marched in the city following the police killing of George Floyd in Minneapolis but strongly opposed by the mayor and police chief.

Durkan and Best had urged the council to slow down its discussions about police budgets, saying the issue could be taken up in earnest when the 2021 city budget is considered. They also said any layoffs would disproportionately target newer officers, often hired from Black and brown communities, and would inevitably lead to lawsuits.

"While we can’t do everything in this summer rebalancing package, we have set the path forward for tremendous work in front of us as a council and as a city," Council member Teresa Mosqueda said.

Seattle currently has about 1,400 police officers and the reductions up for a final vote fall far short of the 50% cut to the department that many Black Lives Matter protesters are seeking.

The City Council had been ready to cut Police Chief Carmen Best’s roughly $285,000 annual salary as well as the pay of other top police leaders. The council settled for a more modest six percent cut to Best's salary but did allow a bigger pay cut for other top brass in the department.

"Today’s news of the retirement of Chief Carmen Best is a loss," wrote a spokesperson for the organization Black Lives Matter Seattle-King County. "It does nothing to further our fight for authentic police accountability and the safety of Black lives, that the first Black woman to hold the position of Chief of Police of the Seattle Police Department has been forced out of her job by the Seattle City Council. Racism is racism. We demand the Seattle City Council stop prioritizing performative action that solely suggests the appearance of change. We demand transparency and accountability for the series of actions and inactions that led to Chief Best’s resignation. And we demand a successor that serves Black Lives."

The Associated Press contributed to this report.