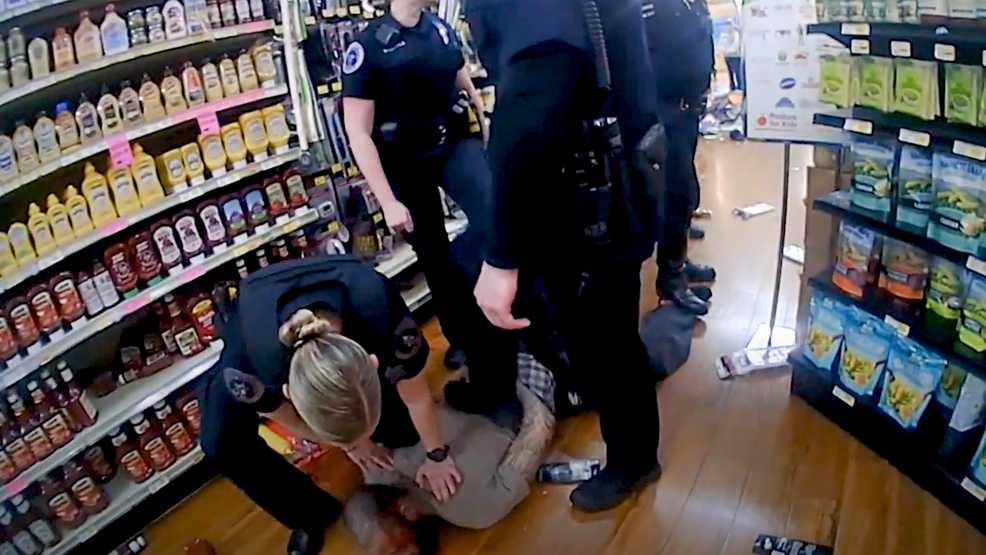 Body camera footage shows a Conway police officer place his foot on Lionel Morris's back as a handcuffed Morris lies face down on the floor. Morris, who was suspected of shoplifting, died after a struggle with the officers. (Video: Conway police)

Conway police officers have been cleared of criminal wrongdoing after a man suspected of shoplifting died in-custody.

Lionel Morris, 39, died shortly after being arrested at a Harps grocery store in Conway on Feb. 4.

Store clerks told police two people were shoplifting after they took a drone out of its box and discarded the box. Bodycam footage released Wednesday shows Morris was initially friendly with officers and told them he planned to buy everything in his cart. But when officers began to put the couple in handcuffs, Morris ran.

Brandi Arnold, who police called Morris’s girlfriend, allowed officers to handcuff her. She was taken to a police vehicle outside as officers chased Morris through the store.

Morris hit his head on a shelf while running and was bleeding from his forehead. A letter from Prosecuting Attorney Carol Crews says Morris was "actively refusing arrest" and "being combative" with officers.

After officers saw Morris reach for a knife chained to his pocket, they used a Taser to subdue him. In the footage, he can be heard yelling “help me please” and “my heart." Officers called for medical help after wrestling Morris to the ground.

Morris can be heard saying “I can’t breathe” multiple times.

Pulaski County court records show Morris was serving five years of probation for felony drug charges at the time of the Feb. 4 arrest. He had previously served jail time for burglary, contempt of court, fleeing, and multiple theft charges.

In one video from police, Arnold can be seen repeatedly telling officers she didn’t steal anything. Arnold has faced drug charges before and spent two days in jail for driving on a suspended license in 2017, according to Van Buren County court records. One female officer told Arnold she should hang out with better people.

Officers asked Arnold what drugs Morris was on so that they could "save his life." She told officers she didn’t know but that he had smoked marijuana and taken morphine in the past. As MEMS arrived, Arnold can be heard yelling “is he ok?” from inside a police vehicle parked outside.

MEMS reportedly found Morris unresponsive and pulseless at the scene, but he was taken by ambulance to the hospital where he was pronounced dead.

The medical examiner found the cause of death to be methamphetamine intoxication with exertion, struggle, restraint and conducted electrical weapon deployment. He tested positive for methamphetamine, cannabinoids, which is a compound found in marijuana, opiates, morphine and amphetamines, according to the toxicology report.

“The level of drugs Mr. Morris had in his system and the strain he exerted while struggling with police ultimately led to his death,” Conway Police Chief William Tapley says in the video.

KATV requested files related to the case two weeks ago but the Arkansas State Police said the investigation was ongoing. The next day, Crews reviewed the case and found no criminal wrongdoing by the officers.

Tapley said there will be an internal investigation to determine if there were any policy or rule violations.

The department's use of force policy states the degree of force used should match the amount of resistance officers face. There are five levels of force outlined in their policy, starting with police presence and ending with death. Using a taser is level three.

Prosecutors said the officer's use of force was justified and reasonable given the circumstances. If Morris had submitted to arrest, his death could have been avoided, Crews said.

“In reviewing this incident, I recognize that there are things as a police department that we can do better,” he said. “And these are things that we will do better.”

Conway Mayor Bart Castleberry said on Wednesday afternoon in a video that he observed some things that were "concerning" while reviewing bodycam footage of the incident. He has subsequently called for some of the officers who made the arrest to be put on paid leave during the internal investigation.

Almost four months after Morris's arrest in Conway, George Floyd, a black man, was choked to death while being arrested by a white police officer in Minneapolis. A video of the killing shows the officer kneeling on Floyd's neck as Floyd yells "I can't breathe." The incident sparked weeks-long protests against police brutality and social injustice in cities around the world including Conway.

In the video on Wednesday, Castleberry said he has put together a committee of African American leaders in Conway to review the policies and training of all of the city's departments.

"There are some behaviors that must change," Castleberry said. "There is no place for racism in the city of Conway...It's time to have hard conversations."