"I'm gonna spit in your face": Man arrested after refusing to wear mask at Walmart 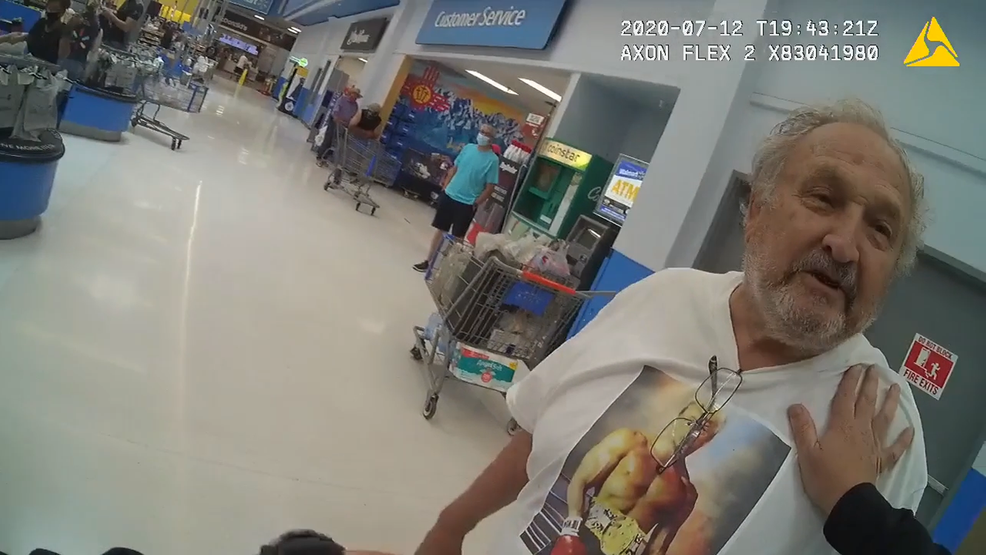 Charles Madrid III was charged on suspicion of three counts of battery on a peace officer, resisting or obstructing arrest, and trespassing after allegedly refusing to wear a mask inside a Las Cruces, New Mexico Walmart. (Source: Las Cruces Police Department)

A man was arrested at a Las Cruces Walmart after allegedly refusing to wear a mask and spitting on several officers as he was being escorted away.

Around 1:44 p.m. on July 12, a Walmart employee told a Las Cruces Police Department officer working overtime at the store at 1550 S. Valley Drive that a man had entered the store and was refusing to wear a mask, according to a police report.

The man, identified as Charles Madrid III, was allegedly asked if he had a medical condition or other reason he could not wear a mask. Madrid allegedly told Walmart employees he wasn’t going to wear a mask and to call the Doña Ana County Sheriff’s Office because he would be gone before deputies arrived.

Store employees pointed Madrid out to the officer as he entered the bathroom. The officer waited for Madrid to leave the bathroom and when the man come out and saw the officer, he allegedly started cussing at him and said, “I’m not gonna wear a (expletive) mask.”

Madrid allegedly tried to walk away and the officer stepped in front of him and informed him he was not free to leave and tried to talk to him, the police report states.

Madrid then allegedly told the officer he “didn’t give a crap” and said, “Screw you. I’m not gonna wear a mask.”

The officer asked Madrid to walk outside with him and told Madrid he would be trespassed from the property and not allowed at any Walmart stores.

In an officer’s lapel video from incident, Madrid is heard saying, “You’re gonna have to drag me out, bro. I’m sick. I’ve got the (expletive) virus. I’m gonna spit in your face."

The police report states, Madrid started spitting at the officer, who said he did not see, feel or hear anything other than air come out of Madrid’s mouth the first two times. The officer said he immediately turned Madrid away from him and tried to hold his arms. Madrid grabbed a customer’s cart, which the officer forced him to let go of before grabbing both of Madrid’s hands, the according to the report.

The officer said Madrid refused to put his hands behind his back and as the officer tried to escort him out of the store, he yanked a hand free.

Lapel video shows the officer attempting to hold Madrid’s hands and refusing to walk with the officer as he tried to escort him out of the store.

According to the police report, the officer called for another officer to help and Madrid continued to struggle to free himself. Madrid accused the officer of beating him up and the officer told Madrid he wasn’t going to let him spit in his face.

The officer said he grabbed one of Madrid’s hands and put his hand on Madrid’s back in an effort to guide him out of the store. Madrid then sat down on the ground and accused the officer of beating him up.

“I’m an old man. They’re beating the (expletive) out of me and I ain’t done nothing,” Madrid is heard saying in the video.

The officer held onto Madrid’s arm as the man yelled at customers that they shouldn’t be wearing masks, according to the police report. In the video, Madrid can be heard saying, “These (expletives) got you wearing masks and that kind of virus doesn’t survive in the summertime it only comes in the winter. It’s the same class of virus as the cold and the flu.”

Madrid claimed he could not walk, and a customer brought him an electric cart to sit in and Madrid further claimed he could not get into the chair, the police report states. The officer said he told customers Madrid was acting out because he had walked out of the bathroom and was trying to walk into the store to shop.

As the officer is holding Madrid’s arm as he sits on the ground, Madrid can be heard on video saying, “Let go of my (expletive),” before spitting in the officer’s face.

The officer then pushes Madrid onto his stomach on the ground and attempted to put him in handcuffs.

Madrid struggled and accused the officer of beating him up and hurting him, according to the report.

Once the officer was able to handcuff Madrid, he rolled him onto his side so he could breath, the report states. Madrid began to claim he could not breathe and the officer told him there was no weight on him other than the officer holding one of his arms.

“Too late I already (spit on you), and I got the virus so you better get checked out.” Madrid can be heard saying in the video. He then looks at someone standing nearby and says, “Come on bro I’ll spit on you too.”

As other officers arrived to investigate the incident, the police report states Madrid spit on a third officer who was trying to take pictures of him.

Officers then put a spit mask on Madrid as he allegedly continued to spit on them, the police report states.

Madrid then claimed to be having a heart attack and officers called for fire and emergency medical services.

When emergency medical services arrived and tried to speak with Madrid, he allegedly became aggressive, cussing at them and refusing to cooperate with them.

EMS responders told Madrid if he refused to cooperate and work with them, he would have to be left in LCPD custody, according to the police report.

Madrid was charged on suspicion of three counts of battery on a peace officer, resisting or obstructing arrest, and trespassing.

Follow each day's top stories by signing up for our newsletter.