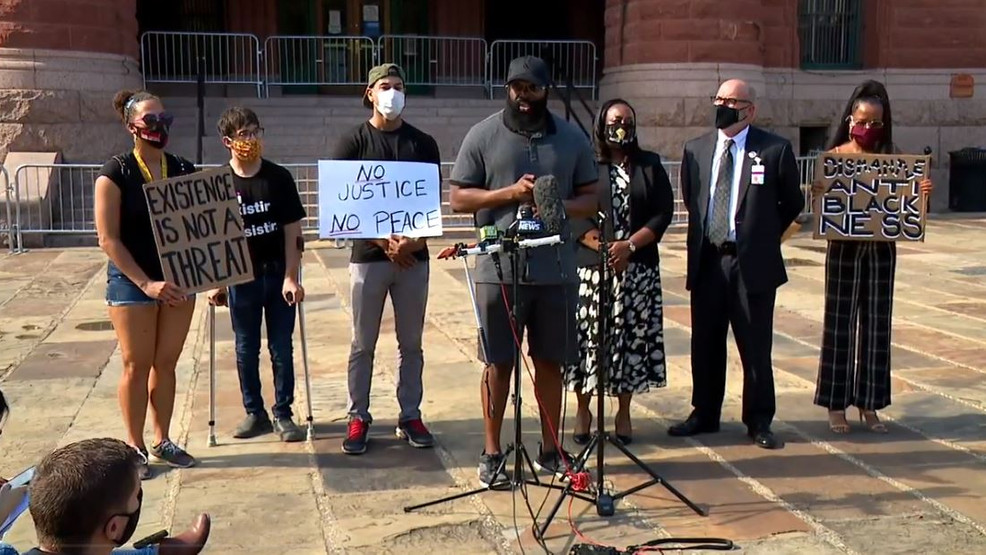 SAN ANTONIO - The man who was arrested for "jogging while Black" made his first public appearance Wednesday morning.

Mathias Ometu, an employee at USAA, said he was worried when he was in the back of the police car after he was arrested on Aug. 25 while jogging by San Antonio Police officers who were searching for a family violence suspect along Interstate 10 West near Vance Jackson Road.

"I was worried I was going to be another victim," he said as he talked about his entire ordeal while in police custody, which he and his attorney's claim went far longer than it should because he was appointed an attorney that was dead.

"When I was told I had the honor of representing Mr. Ometu, I was not aware that (Mr. Ometu) had already spent two days in jail and having been appointed an attorney that had passed away many years ago," said attorney Adam Kobs. That started a chain of events that shouldn't have happened."

RELATED: Man allegedly kicked officers in the face while he was wrongfully detained

Police were given a description of a Black man wearing a neon green shirt, the same color Ometu was wearing, and began their search. According to details San Antonio Police provided, officers saw Ometu and began to question him.

However, Ometu would not provide his identity and soon, officers put him in handcuffs "for his safety as well as officer safety" because his "demeanor became aggressive."

According to officers, Ometu ended up kicking an officer in the face, which is what he ended up being arrested for. The body camera footage provided by police shows Ometu refusing to identify himself. Cell phone footage from a bystander shows Ometu being shoved into the back of the car.

"I was told to calm down, but there’s nothing calm about placing an innocent man in the back of a police vehicle," he said. "I was guilty before proven innocent. "

He spent two days in jail but his charges were later dropped by District Attorney Joe Gonzales, after he was able to review the video from witnesses and also the body cam footage.

RELATED: 'Even the law-abiding citizens are not safe,' father of wrongfully arrested man speaks out

I felt like I was trapped and held against my will and there was no ending for what I was going through," Ometu said. "Being a black male whenever you are approached by a police officer, your awareness is picked up."

Mr. Ometu made very clear during the press conference that he felt that he was victimized by police for exercising his rights and doing everything he can within those rights. He went on to say that he is still feeling physical pain from being handcuffed and having his head hit on part of the police cruiser when he was being put in the back.

As soon as the door closed on that police cruiser, Ometu said he felt trapped and things only got worse when you reached the Bexar County Jail.

"I felt violated, extremely violated," he said. "The bond hearing was done immediately without any selected counsel or opportunity to speak to counsel, specifically about your case. When hearing I would be responsible for $20,000 for the release of my bond, I thought I was done for."

Ometu's attorney, Tess House, says during the arrest Ometu can be heard saying "you're choking me" and he was arrested for "jogging while black."

"You will see another abuse of force by law-enforcement and that’s not right and that’s unjust," she said. "They wanted to target him because they said how dare you know what your constitutional rights are and how dare you assert them to the San Antonio Police Department. There needs to be a transformation in the hiring process of San Antonio Police Department and there needs to be an increase in training and different types of training."

RELATED: Charges dropped against jogger who was arrested by San Antonio police