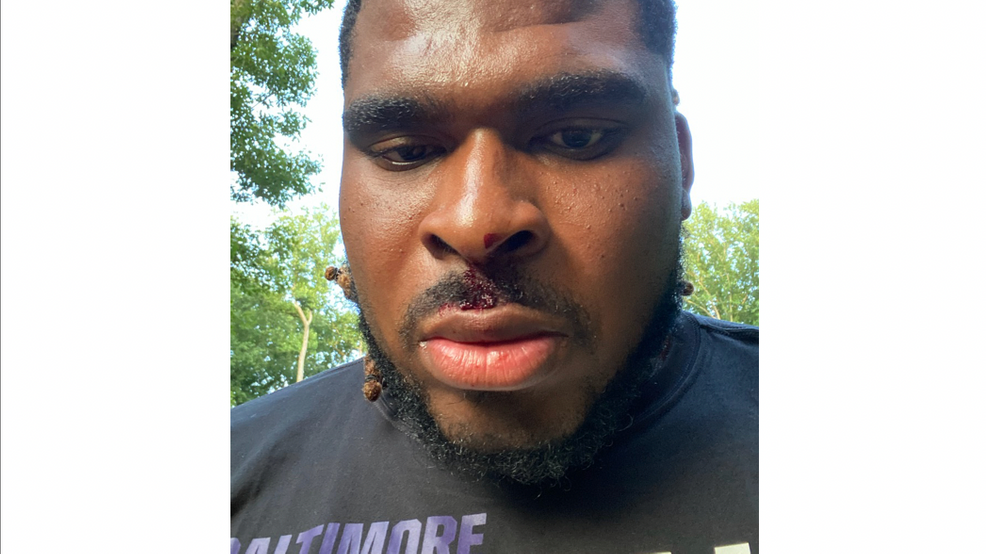 WARNING: Images may be considered too graphic or disturbing for some viewers

REISTERSTOWN, Md. (SBG) — A Baltimore Ravens lineman has allegedly been a repeated victim of domestic abuse, according to police documents.

According to police reports obtained by WBFF, D.J. Fluker says he has been the victim of several assaults over the course of his long-term relationship with Kimberly Davis, who he has a child with.

Davis was arrested following a July 13 incident at the couple’s home in Reisterstown, Maryland, after she allegedly punched Fluker in the nose over an argument over social media. The responding officer observed dried blood coming from his nose and a photo obtained by WBFF from that night shows blood on Fluker’s face.

According to the police report, Davis told the officer she poked Fluker in the nose during an argument because she became angry after she was told she was a bad mother. She allegedly told police she didn’t intentionally hit him to cause harm and said her fingernails could have accidentally scratched his nose, causing him to bleed.

She was taken into custody that night and is facing charges of second-degree assault and destruction of property.

According to the July 13 police report, Fluker told police that wasn’t the first she has assaulted him over the course of their relationship.

During a follow-up visit by police two days later, Fluker informed police there was another incident on June 29 that he didn’t file a police report for.

Video obtained by WBFF from that night appears to show Davis repeatedly striking Fluker while arguing about taking care of their daughter.

He told officers he had to check with his employer, the Baltimore Ravens, first before filing a report. The police report says Fluker filed a report for an incident he indicated happened on June 29. It is unclear whether charges were filed regarding the incident captured on video or if there was a separate incident on June 29.

The Ravens released a statement from Senior Vice President of Communications Chad Steele on the case involving Fluker:

“We have been in regular communication with D.J. regarding this matter and will continue to monitor the situation.”

The Ravens and NFL are still grappling with how to address instances of domestic violence following the 2014 case with former Ravens running back Ray Rice, who was recorded knocking his girlfriend to an elevator floor and dragging her into the hallway.

Earlier this offseason, Ravens safety Earl Thomas reportedly was also a victim of domestic abuse. TMZ reported Thomas’ wife held a gun to his head after she caught him cheating and was arrested following the incident.

Thomas took to Instagram before the report came out and asked for prayers for him and his wife.

Last season, cornerback Jimmy Smith was suspended for four games for threatening and emotionally abusive behavior toward his girlfriend. In a statement, the Ravens said Smith acknowledged his behavior was wrong and agreed to go through treatment. He was allowed to return to the team following his suspension.