Squatter accused of living in Austin couple's home while for sale, stealing electronics 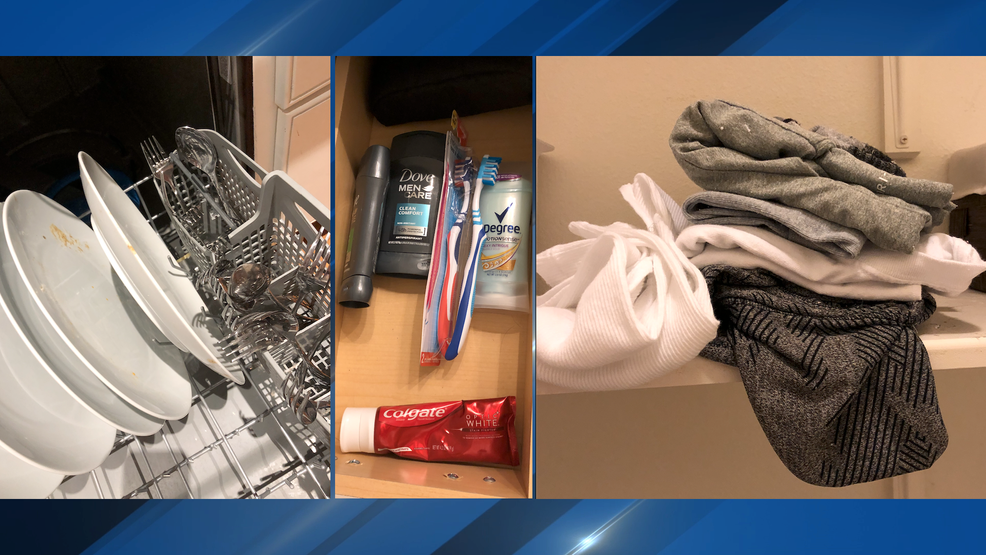 The homeowner tells CBS Austin the man they believe was squatting in their home had dishes in the dishwasher, toiletries in the bathroom, and clothes in the laundry. (Courtesy photos)

When one north Austin couple found leftovers in the fridge, dishes in the dishwasher, and freshly done laundry, it was cause for concern instead of relief someone did these chores because they had not lived in that home for some time.

Instead, surveillance cameras from neighbors showed a man had been squatting for almost one week in their home they're trying to sell in the Brentwood and Crestview area.

CBS Austin spoke with a woman who asked to remain anonymous, and she said she could not believe what she saw inside her home when her husband alerted her to what had happened.

"We opened our refrigerator, and thought, 'Oh my god!' He had used our pans to make mashed potatoes, and there was leftover mashed potatoes and boiled shrimp in the fridge, and it looked like he had beef fajitas and corn tortillas on the agenda for the next night, as well as some peel-and-bake Nestle cookies. He clearly was unpacked and feeling comfortable. There was dishes in the dishwasher, so he had been staying there and cooking," the homeowner said. "We kept discovering things one by one. It was quite upsetting, and frankly, I didn't sleep for a couple of days after that, even though we were sleeping at a different house. It was quite disturbing."

The couple also found toiletries in the guest bathroom, freshly done laundry, and clothes and shoes in the closet.

The homeowner said this was surprising at first, but scary the more she thought about it.

"It was pretty terrifying. I had a friend in town that week, and we had told her she could stay in the house. My immediate reaction was, 'Dear god, what if my friend had been staying there when he was letting himself in or out, and he injured one of my friends?' It's certainly scary," she said.

The couple locked their doors and windows the last time they were at the home, and have no idea how the squatter got in.

Her husband came face-to-face with the man they believe squatted in their home when he went to take the garbage from the backyard to the front of the house. Then, a man jumped the backyard fence, and left after he saw this and started asking questions. This happened July 16, and they said surveillance video shows he first entered their home July 10.

CBS Austin reached out to the Attorney General's office for advice in squatter situations. Their consumer protection arm did not have tips for this specific situation, but a spokesman also pointed us to the state's property code, which made clear property owners could give an oral or written order to vacate to someone who forcibly enters their property, and it could be in effect immediately.

APD detectives said squatting wasn't the only thing they believe the man in question did. They believe he also stole electronics and tools from the couple - including a TV, speakers, and a laptop.

The woman shared surveillance images from neighbors showing the man her husband ran into, carrying a speaker out of their home.

"My husband doesn't have a detailed inventory of everything in our garage. I'm afraid we're going to be discovering things that have been missing for months to come," the homeowner said.

The couple had visited the home a few times in the week the man was in their home, but only to pick up things from the garage.

They did not notice anything out of the ordinary from the outside, and once they began surveying the inside of the house, they noticed he took steps to make things seem like normal, like using air fresheners to cover up the smoky smell the homeowner said was there.

"We couldn't immediately tell he was staying there. All of the beds were made up perfectly. Even the place where the TV and all of the electronics were, he even hung up a picture over all of the wires on the wall," the homeowner said.

After discovering the man living in their home, the couple got professional cleaners to clean the house, because they were concerned about the COVID-19 pandemic.

As detectives continue investigating, the couple is urging their neighbors to be extra careful whenever they leave their home either to sell it or to go on vacation.

"Definitely be diligent, take a look around, and make sure nobody has been moving stuff or using your things," the homeowner said.