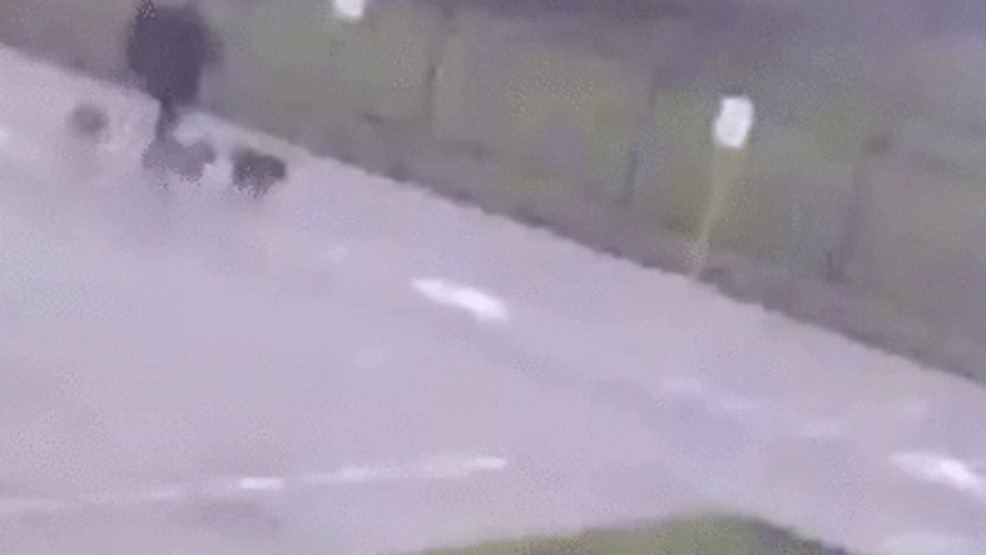 A man who was struck by lightning while leaving a park with his three dogs in Spring, Texas, on October 3 was rescued thanks to the swift actions of a technician from an adjacent veterinary hospital and another bystander, who both carried out CPR.

Video shot by a security camera at Stuebner Airline Veterinary Hospital shows the moment of the strike, which caused the man to collapse instantly, and the emergency response that followed.

Corey Hart told Storyful he was sitting in his car waiting to pick up his daughter, an employee at Stuebner Airline Veterinary Hospital, when he saw a flash and heard the “incredibly loud sound” of a lightning strike. He then saw three dogs fleeing across the parking lot before spotting the dog’s owner, Alex Coreas, appearing lifeless on the ground in the rain. Hart ran toward the man and found that he was unresponsive. He then flagged down Bill Williams, a technician at the hospital, who immediately started performing CPR on the man.

Hart and Williams then took turns doing chest compressions on the man, with help from another hospital worker, Christy Mittler.

Hart said they were convinced Coreas was never going to wake up. “The whole front of his shirt was burned,” Hart told Storyful. They continued performing CPR on Coreas, despite lightning striking nearby around them. “There’s nowhere to drag him to. You got to do it there,” Hart said.

Eventually, Coreas showed some signs of responsiveness and was breathing again after an ambulance arrived on the scene.

Speaking to Storyful, Hart refused to take credit for helping to save Coreas. “It wasn’t me, it was God," he said, explaining that he was not meant to be at the hospital that day and that the area was otherwise empty.

Liz Roesner, the office manager at Stuebner Airline Veterinary Hospital, said the hospital released the video to raise awareness of the importance of CPR training, and of the dangers of extreme weather.

Coreas was taken to Memorial Hermann hospital, where he was recovering.

His family established a GoFundMe page to help pay for his medical expenses, saying he sustained “very serious injuries.” They wrote that his clothes “caught on fire from the lightning strike, his shoes were knocked off, and he fell forward to the ground.”

Stuebner Airline Veterinary Hospital also said it would donate $10 for each transaction and each microchip implanted on Tuesday, October 8, and hoped that a donor would choose to match the total amount raised.

Coreas’ three dogs who fled, frightened by the lightning strike, were later found.