Isaias has strengthened into a Category 1 hurricane 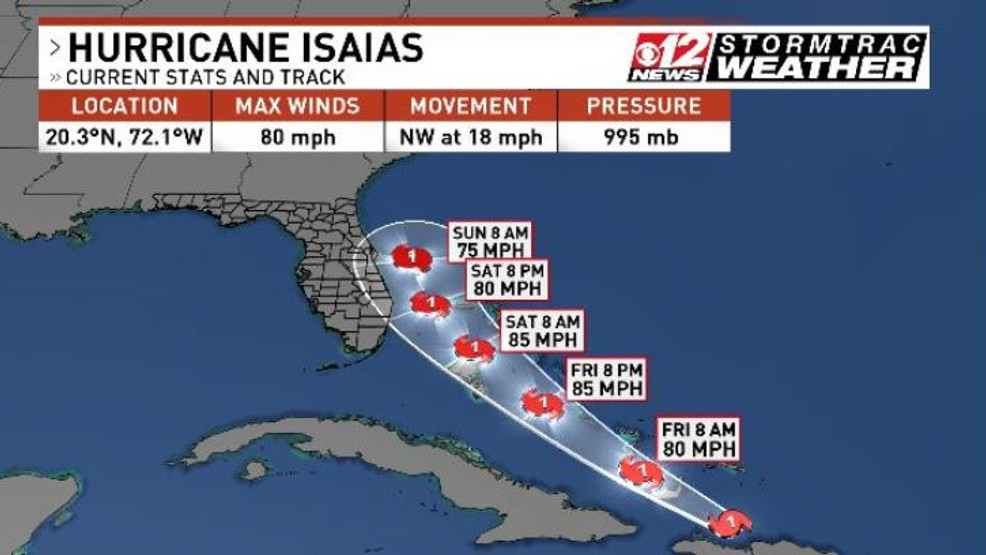 Isaias has strengthened into a Category 1 hurricane (WPEC)

The storm is packing maximum sustained winds of 80 mph and bringing heaving rain and winds to portions of the Dominican Republic.

Right now, it's located about 85 miles southeast of the Dominican Republic and moving northwest at 20 mph.

South Florida and the Treasure Coast, excluding Okeechobee County, is under a tropical storm watch. Tropical storm warnings are posted for the southeastern and central Bahamas, the Dominican Republic, the north coast of Haiti, and the Turks and Caicos Islands.

A hurricane warning has been issued for the Bahamas.

Isaias is the earliest I-named storm on record. The previous record was held by Irene from the 2005 season, which developed on Aug. 7.

This is the 6th storm this season that has set a record for the earliest development. And all of the storms this year have developed prior to their average formation date.

The storm remains very disorganized at this hour with a low-level center south of Hispaniola and a mid-level center north of the island. The longer this trend continues, the less likely the storm will strengthen at a quick rate.

This storm is also very eastern loaded. Since it's eastern loaded, the heaviest rain and strongest winds remain well east of the center. If this trend continues, and if the forecast keeps the center of the storm off our coastline, we could be talking about less than an inch of rain for most locations and breezy conditions. The closer to the coastline you are, the more likely you'll find 20 to 30 mph winds with an occasional gust of 40 mph. The farther away from the coast, the more likely you'll find 10 to 20 mph sustained winds.

The highest impact will be rough surf and rip currents; eight to 10-foot seas just offshore are likely on Saturday with occasional waves as high as 15 feet. Rip current risk will remain high through the weekend. Mariners should avoid the water.

If the track shifts west again, we could see those impacts increase as the eastern side of the storm would move closer to shore. This is a low confidence forecast in impacts right now, and will continue to be until the storm leaves the island of Hispaniola tonight. We should have higher confidence in Florida impacts starting Friday.

There is a second potential tropical system in the Atlantic, just off the coast of Africa.

The National Hurricane Center says Disturbance 1 has a 50 percent chance of cyclone formation in 48 hours.

The mass of showers and thunderstorms have become better organized near the Cabo Verde Islands. It could be the next tropical depression. Josephine is next on the list of storm names.

Follow and prepare for the 2020 Hurricane Season by downloading the CBS12 News Hurricane Guide.